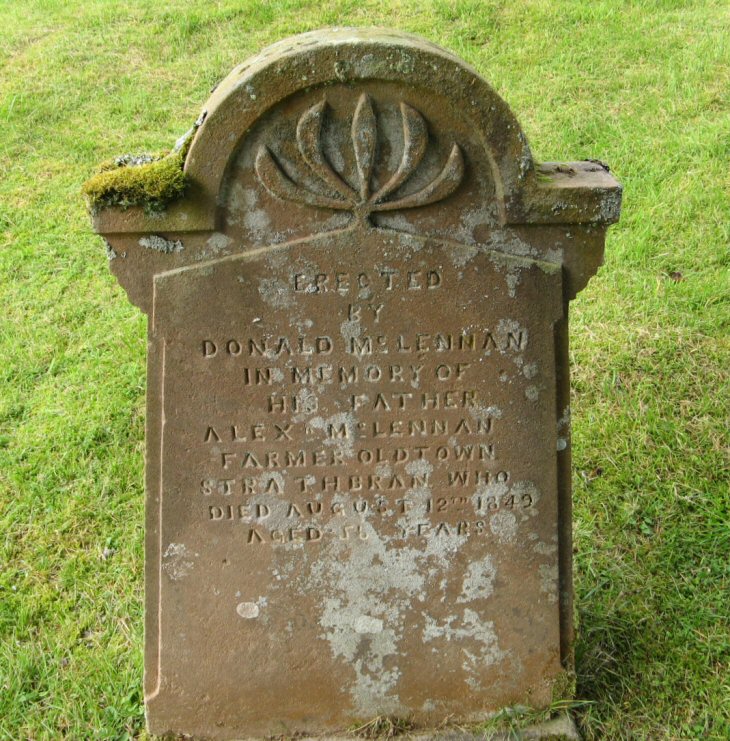 Have you got the wrong picture attached to this transcript?
I'm very interested in the Gillanders and McLennan stones at Achanalt and also Contin and Garve and these are mostly my family. Have you got the stones for Strathconon?
Added by Lesley INstone on 23 November 2008.
Thanks Lesley....good spot! Corrections made. See you've found Strathconon entries.
Added by Roddie on 24 November 2008.
I believe this may be my Great Great Grandfather, Alexander McLennan's grave. He was a farmer at Old Town, Strathbran born about 1796 and died in the 1860's. He was married to Catherine McLennan and their youngest son was Donald McLennan. Their daughter Janet McLennan was my Great Grandmother. However as there were many McLennans in that area, I may be wrong in thinking this is my ancestor's grave.
Added by Sheila Macdonald on 05 December 2010.
Sheila - do you have parents for your Great Great Grandfather Alexander McLennan (born c1796 died in 1860s) - should be on his death certificate - although this stone has 1849 as the date of death.
My Strathbran MacLennan/McLennan family are the children of Alexander MacLennan and Catherine Gillanders (he died before 1850s and she died late 1850s - only 2 of their family (8 so far but I'm sure there must be an Alexander I haven't found yet) are in the Contin OPR - Catherine Gillanders was daughter of Alexander Gillanders and Anne McLennan but I don't have parents yet for Alexander MacLEnnan. Children so far are John (my ancestor, married Isabella HArvey, farmed at Scardroy & Carnoch in Strathconon then moved to Fernaig in Lochalsh), Catherine (married a Donald McLennan), Anne (married a McRae), Murdoch, Duncan, Donald, Roderick (farmed at Stratwell Mains, Strathconon)
Any connections?
There has to be an Alexander among there children.
Added by Lesley Instone on 05 December 2010.